​Although N1387V, the yellow N2S, is under restoration, the Utah Wing offers scenic Stearman experiences in the beautiful PT-17 "N7995" 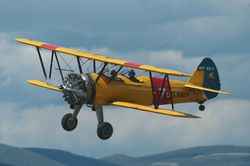 Just prior to the beginning of WWII Lloyd Stearman of the Stearman Aircraft Corp. was commissioned by General Hap Arnold to design and build a primary trainer, suitable for all branches of the military. The final production aircraft, Model 75, was an inexpensive, very rugged, tandem, two place, open cockpit, fabric covered, bi-wing aircraft. Because of its' cheap cost, high maneuverability, and strong airframe it was instantly accepted and used by both USN and US Army Air Corp. So widely used by the military, that during World War II over 190,000 Army Air Corp, US Navy and Marine Pilots completed primary training in this unstable tail dragger. The Boeing Aircraft Corp. purchased the Stearman Aircraft Corp. and officially designated it the Boeing "Kadet". This name never really caught on. Instead it has always been commonly referred to as the "Stearman", named after its' original designer and builder. The USN also frequently called it the "Yellow Peril". Yellow because the bold yellow Navy paint scheme and peril because of its willingness to ground loop after landing. The demands of WWII resulted in the production of 10,000 Stearman. After the war many were modified and converted to be used as crop dusters. Others survived to fly aerobatic demonstrations at air shows and flying circuses. Today the Stearman is still a very popular airplane and over 1000 are still flying.

Stearman construction number (C/N) 75-8291, FAA registry N1387V, is a very unique airplane. It was manufactured in 1943 at the Boeing plant in Wichita, KA as an N2S-5 (USAAF equivalent PT-13D). It served as a basic trainer with the US Navy at Corpus Christi Texas. After the war it was purchased from the military and modified for crop dusting duty. A larger 450 horsepower Pratt and Whitney R-985 engine was mounted to replace the original Lycoming R-680-17, 220 horsepower engine. Also a Hamilton Standard constant speed propeller was substituted for the original fixed pitch prop. These modifications greatly increased the performance of the aircraft without making major alterations to the basic airframe.

75-8291 was purchased in the early 1980's as a personal recreational aircraft it was relieved from dusting, and fully restored. Then, while on a cross country flight to California in the summer of 1986 the aircraft suffered a catastrophic crash in the trees of the Oquirrh Mountains just west of Salt Lake Valley. The Utah Wing of the Commemorative Air Force was able to purchase the salvage rights and removed the wreckage from the mountain. The wreckage was transported to Jerome, ID (near Twin Falls) where it was completely restored to flying condition. It passed its airworthiness tests and made its maiden flight August 17th, 1988. Since that time 87V has been a regular and popular performer at local air shows and regional fly-ins.

In the fall of 2015 the Utah Wing of the CAF decided to embark on a restoration project for 1387V. That winter the 4 wings were removed from the airframe. They were stripped of fabric, minor structural repairs were completed, and then new Poly-Fiber fabric was applied. (Our great thanks to the fantastic support from Consolidated Aircraft Coating and Jon Goldenbaum! ) The wings were then repainted by Dave Hansen and reinstalled for flying in the summer of 2016.

Then, in the fall of 2016 the wings were again removed and carefully stored. The Pratt & Whitney R-985 engine was removed and stored and the fuselage fabric was removed. The fuselage frame was paint-stripped, inspected, and repaired as necessary. It was then repainted and returned to the museum hangar to begin the major portion of the restoration project.