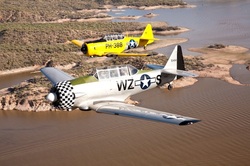 The Texan was a single-engine advanced trainer aircraft used to train pilots of the US Navy and Air Force and their allies. Designed by North American Aviation, the iconic trainer is known by a variety of designations depending on the model and operating air force. The United States Navy named the airplane SNJ (reflecting that it was a Navy Trainer from North American,) the USAAC and USAAF designated it as the AT-6, and British Commonwealth air forces called it the Harvard. After 1962, US forces designated it the T-6. It remains a popular warbird aircraft used for airshow demonstrations, static displays, warbird rides and all-around fun aviating.
​