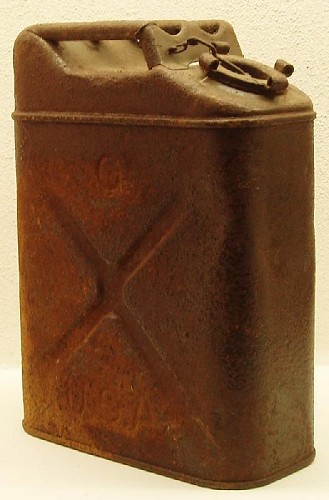 During World War II the United States exported more tons of petroleum products than of all other war material combined. The mainstay of the enormous oil-and gasoline transportation network that fed the war was the oceangoing tanker, supplemented on land by pipelines, railroad tank cars, and trucks. But for combat vehicles on the move, another link was crucial; smaller containers that could be carried and poured by hand and moved around a battle zone by trucks.

Hitler knew this. He perceived early on that the weakest link in his plans for blitzkrieg using his panzer divisions was fuel supply. He ordered his staff to design a fuel container that would minimize gasoline losses under combat conditions. As a result the German army had thousands of jerry cans, as they came to be called, stored and ready when hostilities began in 1939.

The jerry can had been developed under the strictest secrecy, and its unique features were many. It was flat-sided and rectangular in shape, consisting of two halves welded together as in a typical automobile gasoline tank. It had three handles, enabling one man to carry two cans and pass one to another man in bucket-brigade fashion. Its capacity was approximately five U.S. gallons; its weight filled, forty-five pounds. Thanks to an air chamber at the top, it would float on water if dropped overboard or from a plane. Its short spout was secured with a snap closure that could be propped open for pouring, making unnecessary any funnel or opener. A gasket made the mouth leak proof. An air-breathing tube from the spout to the air space kept the pouring smooth. And most important, the can's inside was lined with an impervious plastic material developed for the insides of steel beer barrels. This enabled the jerry can to be used alternately for gasoline and water.

Early in the summer of 1939, this secret weapon began a roundabout odyssey into American hands. An American engineer named Paul Pleiss, finishing up a manufacturing job in Berlin, persuaded a German colleague to join him on a vacation trip overland to India. The two bought an automobile chassis and built a body for it. As they prepared to leave on their journey, they realized that they had no provision for emergency water. The German engineer knew of and had access to thousands of jerry cans stored at Tempelhof Airport. He simply took three and mounted them on the underside of the car.

The two drove across eleven national borders without incident and were halfway across India when Field Marshal Goering sent a plane to take the German engineer back home. Before departing, the engineer compounded his treason by giving Pleiss complete specifications for the jerry cans manufacture. Pleiss continued on alone to Calcutta. Then he put the car in storage and returned to Philadelphia.

Back in the United States, Pleiss told military officials about the container, but without a sample can he could stir no interest, even though the war was now well under way. The risk involved in having the cans removed from the car and shipped from Calcutta seemed too great, so he eventually had the complete vehicle sent to him, via Turkey and the Cape of Good Hope. It arrived in New York in the summer of 1940 with the three jerry cans intact. Pleiss immediately sent one of the cans to Washington. The War Department looked at it but unwisely decided that an updated version of their World War I container would be good enough. That was a cylindrical ten-gallon can with two screw closures. It required a wrench and a funnel for pouring.

That one jerry can in the Army's possession was later sent to Camp Holabird, in Maryland. There it was poorly redesigned; the only features retained were the size, shape, and handles. The welded circumferential joint was replaced with rolled seams around the bottom and one side. Both a wrench and a funnel were required for its use. And it now had no lining. As any petroleum engineer knows, it is unsafe to store gasoline in a container with rolled seams. This ersatz can did not win wide acceptance.

The British first encountered the jerry can during the German invasion of Norway, in 1940, and gave it its English name (the Germans were, of course, the Jerries). Later that year Pleiss was in London and was asked by British officers if he knew anything about the can's design and manufacture. He ordered the second of his three jerry cans flown to London. Steps were taken to manufacture exact duplicates of it.

Two years later the United States was still oblivious of the can. Then, in September 1942, two quality-control officers posted to American refineries in the Mideast ran smack into the problems being created by ignoring the jerry can. I was one of those two. passing through Cairo two weeks before the start of the Battle of El Alamein, we learned that the British wanted no part of a planned U.S. Navy can; as far as they were concerned, the only container worth having was the Jerry can, even though their only supply was those captured in battle. The British were bitter; two years after the invasion of Norway there was still no evidence that their government had done anything about the jerry can.

My colleague and I learned quickly about the jerry can’s advantages and the Allied cans costly disadvantages, and we sent a cable to naval officials in Washington stating that 40 percent of all the gasoline sent to Egypt was being lost through spillage and evaporation. We added that a detailed report would follow. The 40 percent figure was actually a guess intended to provoke alarm, but it worked. A cable came back immediately requesting confirmation.

We then arranged a visit to several fuel-handling depots at the rear of Montgomery's army and found there that conditions were indeed appalling. Fuel arrived by rail from the sea in fifty-five-gallon steel drums with rolled seams and friction-sealed metallic mouths. The drums were handled violently by local laborers. Many leaked. The next link in the chain was the infamous five-gallon petrol tin. This was a square can of tin plate that had been used for decades to supply lamp kerosene. It was hardly useful for gasoline. In the hot desert sun, it tended to swell up, burst at the seams, and leak. Since a funnel was needed for pouring, spillage was also a problem.

Allied soldiers in Africa knew that the only gasoline container worth having was German. Similar tins were carried on Liberator bombers in flight. They leaked out perhaps a third of the fuel they carried. Because of this, General Wavell's defeat of the Italians in North Africa in 1940 had come to naught. His planes and combat vehicles had literally run out of gas. Likewise in 1941, General Auchinleck's victory over Rommel had withered away. In 1942 General Montgomery saw to it that he had enough supplies, including gasoline, to whip Rommel in spite of terrific wastage. And he was helped by captured jerry cans.

The British historian Desmond Young later confirmed the great importance of oil cans in the early African part of the war. No one who did not serve in the desert, he wrote, can realize to what extent the difference between complete and partial success rested on the simplest item of our equipment and the worst. Whoever sent our troops into desert warfare with the [five-gallon] petrol tin has much to answer for. General Auchinleck estimates that this flimsy and ill-constructed containers led to the loss of thirty per cent of petrol between base and consumer.

The overall loss was almost incalculable. To calculate the tanks destroyed, the number of men who were killed or went into captivity because of shortage of petrol at some crucial moment, the ships and merchant seamen lost in carrying it, would be quite impossible. After my colleague and I made our report, a new five-gallon container under consideration in Washington was canceled.

Meanwhile the British were finally gearing up for mass production. Two million British jerry cans were sent to North Africa in early 1943, and by early 1944 they were being manufactured in the Middle East. Since the British had such a head start, the Allies agreed to let them produce all the cans needed for the invasion of Europe. Millions were ready by D-day. By V-E day some twenty-one million Allied jerry cans had been scattered all over Europe. President Roosevelt observed in November 1944, "Without these cans it would have been impossible for our armies to cut their way across France at a lightning pace which exceeded the German Blitz of 1940."

In Washington little about the jerry can appears in the official record. A military report says simply, a sample of the jerry can was brought to the office of the Quartermaster General in the summer of 1940.

Richard M. Daniel is a retired commander in the U.S. Naval Reserve and a chemical engineer. 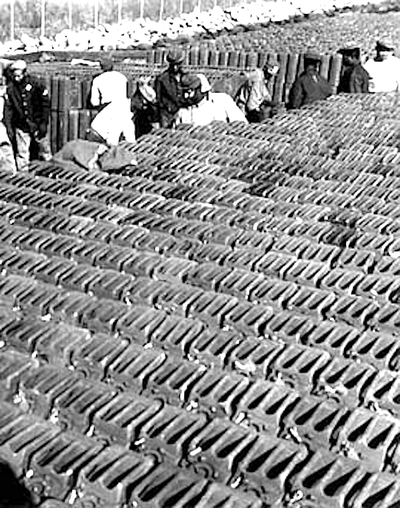 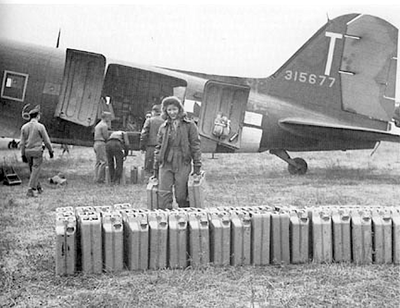 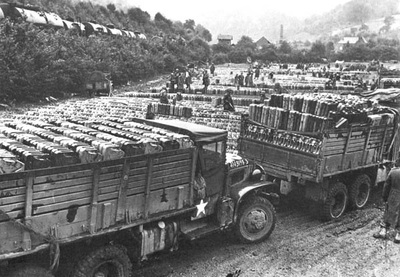 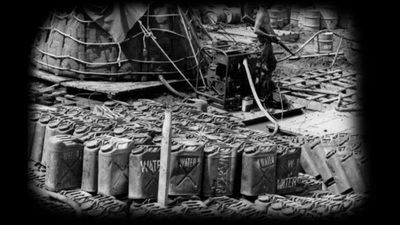 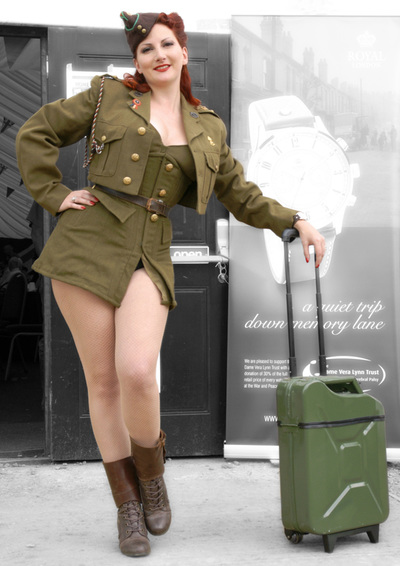 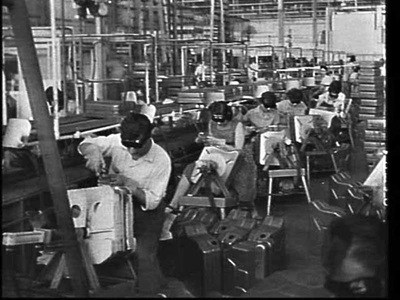